Many thanks to Carlos of Utah, USA for this account:

Growing up I never had any animal pets and so I never paid much attention to animals. My wife however has always loved animals. My kids were still very young when a friend of my wife gave her a dog, whom we named Earnie.

At the time when we brought Earnie home, we lived in a rented duplex home and we were not allowed to have him in the house. Earnie had to stay tied to a chain most of time. He was constantly looking for some way of getting free and in the process would chew on the fence. A year or so later we built our first home, but it would still take us a couple of years before we could have a fence. As I look back, it breaks my heart to know how much he suffered being confined and tied. One time we had him in a chain link kennel and he was so strong that he started to chew the chain links. Many times I lost my patience and mistreated him. Once we built the fence, we let him roam around free and the nightmare was over - except for the winter. We live in Utah and some winters can be very cold. Earnie lived all his life outside and regardless of how cold it was he wanted to stay outside.

Earnie was about twelve when he became very sick. The vet said that his kidneys were shutting down and the decision was made to put him to sleep. I remember how difficult this was for my wife, but for me it was a matter of fact, even though my heart was already softening.

At around this time, I became interested in researching life after death. As part of this, I read a book called "Astral Dynamics" and I started to practice OBE (Out of Body Experience). One day, I got home from work and sat at a recliner chair we had in our family room and I decided to relax a little. Moments later, I found myself outside of my body, standing at a very peculiar place. Suddenly, a pack of dogs came rushing right by me and one of them left the pack and - leaping right on to me - hugged me. I immediately recognized Earnie. He was very happy to see me and telepathically impressed very clearly upon my mind that he loved me and had forgiven me. This was definitely a turning point in my life and I am very thankful to Earnie for making me a better person. Words cannot describe the feeling that this experience brought into my soul.

Sometime later, feeling sorry for my wife, I suggested that we get another dog. 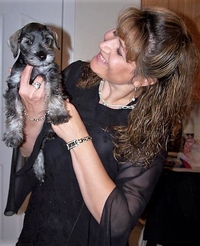 This is when we brought home this very special female schnauzer that we named Nina. What an angel she turned out to be! Eventually we ended up having five dogs and Nina mothered them all.

When Nina was eight years old, she was diagnosed with melanoma cancer in one of her front paws. I was torn apart when the vet suggested amputation. I still can’t believe that I went along with it. That was a very difficult decision, but the whole family decided that it was the right thing to do.

She lived another five years after the amputation. Nina had a very difficult life and the whole family loved her dearly and we did all we could to make her comfortable. By December 2017, we knew that the end was coming. The vet had said her kidneys were shutting down. I took some time from work to be with her since by now every time she needed to go outside she needed to be carried out. Our Christmas was very sad because we knew it was just a matter of days and she would be gone. It was December 31st at 2:30 in the afternoon. The family had gathered together with all our beloved dogs. The vet arrived at our house to perform the euthanasia procedure. This was the most painful moment of my life. Words cannot describe the pain.

I took this picture of Nina a few days before Christmas.

Some interesting things happened to me after Nina left. The first night after she was gone, I dreamed of her. The next night, I woke up at around three or four in the morning, with the sound of a dog panting in my ears. Only Minnie was in the bedroom but she was sleeping and I knew that it wasn’t her. Seconds after the panting, I heard Sophie my other Schnauzer downstairs scratching the door as she always does when she needs to go outside. So, I thought that it had been Nina panting to wake me up to go open the door for Sophie. A couple of nights later, I had an OBE and this time I saw Nina. First, I saw her as she was, with the right front leg missing and almost immediately I touched her and felt and saw both her front legs. I think this was a way for her to identify herself to me.

I am very thankful that I have had the opportunity to see Nina and to know that life is eternal and that one day I will have the pleasure to hold her again in my arms.

I love you Nina!