Many thanks to Robin and Joey of Pennsylvania, USA for this account:

My boyfriend of 18 years and I recently lost our beautiful cat, Clementine. She was 16 years old. We felt such emptiness that she had gone. Her health deteriorated so fast. In particular, we wanted to know if there was anything that could have been done to save her and if she felt any pain. Also if she was aware of what was happening at the vets when they put her to sleep. We were heart-broken. We missed her and would have loved to know that she was happy and safe, wherever she was. 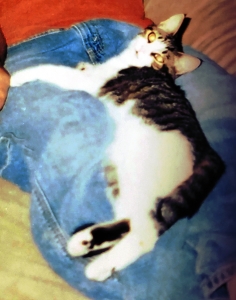 The following is a brief account of our life with her and how she passed over.

I found Clementine at a pet store back in 2004. She was an older kitten. I held her and right away felt a connection with her. She was the first pet which my boyfriend and I had together.

She was a loving cat and loved to eat! She was a big cat - not just from food, but in general she was larger than average. She seemed to favor my boyfriend more, always wanting to be next to him when she was in the mood for attention. She was definitely a daddy's girl! 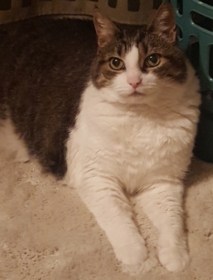 After 5 years with her, I received a kitten as a birthday gift from my sister. Her name is Peeper and she recently turned 11. She's a small cat that still acts like a kitten. Clementine did not like her at first, but over the years she tolerated her. Peeper has been acting different since she passed. She'll go off into a room by herself, which is unlike her. I think she's in mourning.

Clementine had always been healthy, but in the last month I started noticing she was sleeping more. I figured it was just old age. Then she seemed to not eat as much, but still meowed for food. Then two days before we had to put her down she barely ate and what she ate she threw up at end of the day. The next day, she wouldn't eat at all. That night she had trouble walking. We took her to the emergency vets the next morning and they told us she could die at any moment. The vet said it could be anything from kidneys to cancer. She just didn't know. We knew we had to put her to sleep. I don't feel there was anything we could've done to save her. She was a great cat and I'm happy she was in our lives for 16 years. Some of her nicknames were Clemmy, Mimi and Big Mama. When my boyfriend would call the cats over to feed them, he'd yell "Girls!" and both would come running.

We made contact with Peter, after reading about the "Do Animals Have Souls?" website. He enlisted the aid of the cat astral team, who found Clementine and gave her training in how to contact us. We received some advice about how to prepare ourselves for contact from Clementine. Regarding our concerns about whether there was anything that could have been done to save her and if she felt any pain before passing, via the cat team she told us that that she had been very ill indeed when we took her to the vets - and the rest was all a blur to her. She was grateful to us for helping her to cross without any more pain. So that removed a lot of the anxiety we had previously felt. After due preparation, we tried to communicate with Clementine directly and this is what happened: 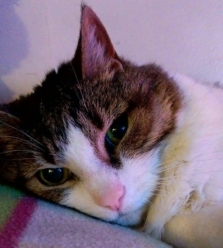 On Monday morning, Joey was in bed trying to sleep and heard a loud meow in his ear. He wasn't expecting it because it was a day earlier then that planned for a first attempt at contact. Later that night at work, he had a bag fall off his desk three times. He was thinking of Clementine. We were not sure, though, if that was her - since it was at his work and on Monday. I had a dream on Tuesday of a large gray cat for a few seconds. It was on a hill sitting with light in background and all I could see was the silhouette but I could tell it was an all gray cat. I had the feeling it was male. I told Joey and he said he had 2 dreams with a large gray cat. He doesn't remember the details but he remembers the large gray cat. We thought it was strange that we both had a large gray cat in our dreams, since Clementine wasn't gray! However, the odds against two people having identical dreams of something unexpected are very high indeed. So it seemed significant. It later transpired, after seeking an explanation, that the cat team was currently helping a grey cat, who had recently passed over and was greatly missing his caretakers. So our dreams went to right place on the astral, but somehow we saw the wrong cat.

On Wednesday night, while I was half asleep, I closed my eyes and thought of Clementine. I saw a faded image of her and it slowly became clear. 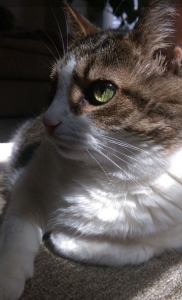 She was laying down like I always remembered her. I opened my eyes thinking it's just my imagination and closed them again. The same thing happened and I could still see her. I questioned whether it was my mind creating it but I have since tried again to test it and haven't been able to see her. It gave me validation that she was indeed communicating with me. We have agreed that our experience can be added to this website, in the hope that it will help someone else heal. We have recently taken in two male cats, in the hope this will give Peeper some company after the passing of our beloved Clementine.