Many thanks to John of Australia for this account:

I am so grateful that I found your website. Thank you! On December 5th 2020, my pet male Water Dragon (Spockie) died. He was a couple of months short of being 27 years old. I bought him from a local pet store in 1995, and having no family of my own, Spockie became my 'family'. He was the most beautiful, intelligent, funny little mate I could have wished for. He had free run of my home, and an enclosed outdoor area, and loved to curl up in my nice warm waterbed.

Before he died, he was being treated by a vet, and at one point, had to have a tube inserted through the side of his neck into his stomach. The tube was put there to inject food and medication. Anyone familiar with the Star Trek (Next Generation) series would know about the 'Borg', a species that was a humanoid/cyborg creation. They had no individual names, but went by designations such as 7 of 9 (one of the actual characters). When I saw Spockie with all these tubes attached to his body, I thought he looked like a Borg, and decided after some consideration that his designation would be 1 of 1 (because he was so unique). But more about that in a moment....

I was shattered after his passing, and still get distressed at times when I think about his last days. Since he died, I have been getting 'messages' from him to let me know he is OK, and that we still have a connection. These 'messages' are in the form of recurring numbers that appear on my watch, TV screen, washing machine display screen, computer screen, and other most unexpected places. As I mentioned above, his designation was "1 of 1" (unique), and this explains why it is the appearance of multiple 1s that form his 'messages'. 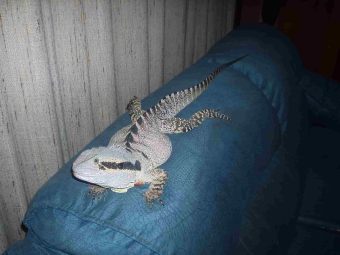 There is another reason for this webpage: to tell people about the "tapping" messages which Spockie is also sending me. From early 2021, I had been experiencing what I initially thought was just a strange sensation on the outside of my left foot. And it was always when I had my boots on, and never felt on my right foot. It was like a gentle, rapid tapping felt against my foot. And it is usually when I am laying on the couch watching TV, with my right leg up on the couch and the left hanging over the side with my foot on the floor. For many years I have on occasions taken a daily magnesium tablet to ease muscle twitches and foot cramps. They usually subsided after taking this for a few days. So after feeling these tapping sensations on my left foot, I commenced taking magnesium again. But after more than a year of taking this daily, the tapping continues.

I recently did a Google search to see if there were any discussions or theories as to whether animals have souls. The best one I found was on the "Do animals have souls?" website, on the page "Animal souls: a rationale" and the descriptions of people's experiences of being contacted by their deceased animal companions. What I found there changed my thinking as to the cause of the sensation on my foot. I no longer thought of it as a physical affliction, but as a manifestation of Spockie reaching out to me from wherever he is, and providing a gentle, reassuring touch to ease my sense of loss. Whenever Spockie saw me in the kitchen, and if he was hungry, he would come rattling across the tiles, running around my feet and looking up at me in a way that said ‘I’m hungry dad, feed me!’ Then he would sit on my left boot as an insistence that I give him what he wanted. When he did that, it was the same tapping sensation that I am experiencing now. This is consistent with what others have experienced after their much loved pet passed on. So now, whenever I feel that gentle tapping, I don’t dismiss it as a physical affliction or a spasmodic muscle twitch, but as Spockie offering his support and affection in a way that I would recognise. When I feel his touch, I simply say ‘Hi Spockie, hello my beautiful little boy. THANK YOU!’ 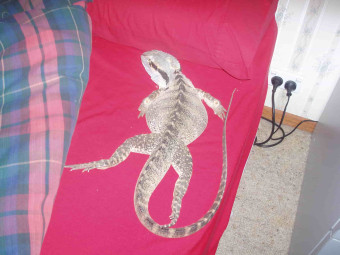 I am not a religious person. But I do believe that we humans do ‘live on’ after leaving this world behind. And as a result of having read the anecdotes of pet owners who contributed their experiences to this webpage, I now believe that our beloved pets DO ‘live on’ after their passing. I think it is no coincidence that the gentle tapping always occurs on my left foot.

He was so beautiful, almost 90 centimeters long and almost a kilogram in weight, with pale blue eye lids, cinnamon coloured eyes with gold flecks and a gold ring around his pupils, yellow stripes running down his 'beard' and from his eyes to the back of his head, rich orange-red tummy, and with black and pale grey camouflage markings what looked like ripples of water on a pond. I hope that my story gives comfort and encouragement to others when they too lose their most beloved of pets. They just have to be open to receive the messages their loved one is sending them.