Many thanks to Jean of Ontario, Canada, for this account:

I met and fell in love with Kazan when the owner was looking for someone to adopt him, because he had gone as far as he could in the show world. He 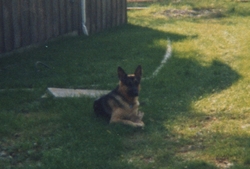 couldn't be used in his owner's breeding program because it would cause an inbreeding problem. Kazan was a two year old German Shepherd Dog and he came home with me that very day.

Kazan fitted in well with our family - my husband, our seven year old daughter and Chelsea, our German Shepherd Dog female; but it was very apparent that he was "my" dog, always with me, curious to see what I was up to and he stuck to me like glue. It is said that German Shepherd Dogs are one person dogs and Kazan proved that saying to be very true. He loved it when we were outside or doing chores in the barn, or when we went hiking down the country roads, rain or shine. I worked part-time and one day I left for work without realizing that the window in the upstairs bedroom was open. I had just got out of the driveway and onto the road and looked in my rear view mirror. There was Kazan racing after my car. He had jumped out of the upstairs window onto the porch roof and then leaped from the porch roof to the ground. He just wanted to be with me. I didn't have the heart to put him back in the house, so I took him with me; he loved car rides. There were certain days when I had to get up at 3 am to go to work but was finished by 10 am. On those days I would have a quick nap and Kazan sat right by the couch, even though our other dog, Chelsea, was outside playing and having fun with my husband and daughter. I'd had dogs all my life and loved them all, but the bond with Kazan was so very special and deep.

Kazan was a beautiful boy and his personality was just as beautiful. He was wonderful and very gentle with our seven year old daughter and would wait for her at the end of the driveway for the school bus to bring her home.

Time flew by, and one day, when Kazan was 8 years old, I realized there was something wrong when my hand felt two lumps at either side of his neck. I took him to the vet's and my heart dropped like a stone when I was told he had cancer. This couldn't be happening! We did not want to put him through chemotherapy treatment as it is so very hard on them, but were told of a drug that was helping dogs with the type of cancer that Kazan had. For six months or so he did very well, was happy and played as usual; but then the cancer took over again and my beloved Kazan left us. My husband and I wrapped him in my best quilt and buried him on the little hill not far from the house.

Every day I missed him and missed stroking his beautiful head and thick shiny coat. I missed his brown eyes looking at me. I missed his lovely, curious personality.

About four or five months after he passed I was vacuuming and was down at the bottom of the stairs, in a sort of numb state of mind, thinking of absolutely nothing. Then something made me look up - and there was my beautiful Kazan at the top of the stairs, looking down at me. I turned off the vacuum and for a minute just looked at him. His coat was thick, shiny and healthy looking and he had gained back the weight that he had previously lost when he was ill. There he was, looking down at me - seeming as real and solid as when he was alive. It was so good to see him; my breath caught in my 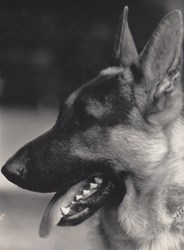 throat and I said, "Kazan, hello my boy." He wagged his tail, then as I started up the stairs he turned around and went into our bedroom. I was fully expecting to see him on the bed, but when I got to the bedroom he was not there. Yet there was an indentation on the bed where he had obviously jumped up. I felt love surrounding me as I sat on the bed for a minute or two and sent all the love that was in my heart to him. I silently thanked him for coming to see me. I felt much comfort knowing that he was OK and that he seemed happy and healthy again.

Every now and again when I was in the barn or doing something around the house I would feel his presence; he always brought a feeling of peace and love. Chelsea would also sense that he was around, as I would see her sniff the air and then give a wag of her tail for her old friend.

We moved to a larger farm and for a while he didn't visit. Then one day I was attending an event where a medium was to give people messages from their departed loved ones and it would be safe to say that everyone there was spiritually/psychically oriented. I was talking to a couple of people I knew when one of the ladies who had organized the event came up to me and said, "I was going to come and tell you that no dogs were allowed, when I realized that the German Shepherd Dog with you is in spirit." I smiled and said, "Oh, yes, he won't bother anyone - he just wants to be with me." She laughed and said, "He's very beautiful." "Yes, thank you," I answered, "that's my Kazan."

When our furry friends leave us, it is heartbreaking. Yet we can take comfort in knowing that they find peace and happiness on the other side and - best of all - they still love us and visit us. Death cannot break the bond!