Many thanks to Kim of Vermont, USA, for this account:

Sassy was our 15.5 year old cat, whom we adopted along with her sister when the mother cat abandoned them at only 2 weeks of age. I was volunteering at a shelter then, had adopted a dog 3 months before and with spring and the "kitten explosion" that occurs there were many needy kittens. 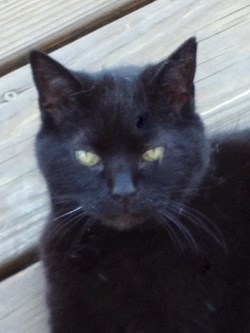 We fostered the kittens starting at 4 weeks of age, having to provide much of the things a mother cat would, but we got them stronger and they flourished. We kept both as a strong bond had existed.

Sassy, from the start, was very needy. She preferred to be with us almost all the time, loving laying in my husband's lap and kneading his stomach (he didn't necessarily love that as much) and purring. Sassy begged food and ate like a dog would. There was nothing typical about her with respect to cat behavior. And while we loved her dearly she was "co-dependent Sassy" in our conversations as she stressed when we were out of her sight or if we went away on vacation for a bit. We hired pet/house sitters rather than having them alone while we were away. It was a kind, loving, safe home where the animals were regarded as children to a degree. We had expectations (no time on the counter, don't feed from the table, etc.) and Sassy tried to break every single one of them.

In April of this year, Sassy had a tumor the size of a jelly bean removed from her front leg and it was found to be cancerous. They did not get clean 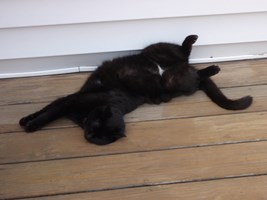 margins as it was embedded in the bone, too. She was too old and weak for treatment or surgery, so we faced the fact that we would lose her probably before year's end. The tumor did not reappear until August and then once it did, it began to grow quickly. She lost a significant amount of weight and in the end was in enough pain (we tried acupuncture for a bit, too) that she was attacking her sister. It was obvious that we were asking her to endure more than she was able to cope with. On October 1st we put Sassy down at the vet's with us holding her and telling her about the next step in her journey and that someday we'd join her but until then to go find Morgan (the dog we had lost 3 years ago and that had helped to raise Sassy and her sister when they came home with us).

Two nights ago I was in the kitchen cutting pumpkin squares that I had to bring to a work meeting. I had noticed that the last cut I made was crooked so I 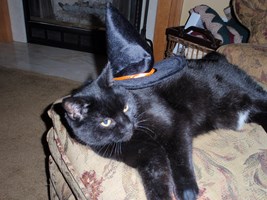 was really focused on keeping the squares and rows neat. While focusing on cutting I heard the chirp and meows that Sassy always made. It was clear as day, I was not thinking of her nor had I been (in fact, I had been working on a project for work for the 3 hours before and was deeply embedded in that thought) and pumpkin squares were my topic at hand. I stopped what I was doing, checked on where the other cat was (upstairs in the bedroom fast asleep) and realized that Sassy was always close by when we were dealing with food.

I told my husband, who joked that we had always said Sassy would "haunt" us and the fact that it had occurred while I was working with food wasn't a surprise.

Honestly, I thought about it for a long time and wasn't sure what to make of it. I am a data analyst, I focus on what can be proven, and the fact that I so very clearly heard this cat that I miss terribly but am certainly capable of coping with the loss, made me really stop and think.