Many thanks to Hayley of West Sussex, UK, for this account:

If I were to tell you how good and loyal and loving Beanie had been to me during the fifteen sweet years of her life, this story would turn into a giant sized book. Not a day went by when I didn't appreciate that little dog. She meant the world to me, and I loved her to bits every day of her life - and beyond her physical life.

Beanie was born in May 1999, and we got her from a rescue centre, in August of the same year. It was my son who wanted a dog. I wasn't too keen on 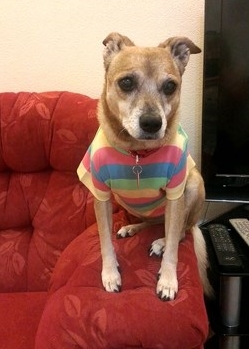 the idea and, at first, I told my son that it wasn't something we could do. A few days later, I felt the pangs of guilt that often make a parent act unwisely. My son, Stephen, was so disappointed, and I couldn't bear it. I had to give in, just as I did when he was only four years old and insisted on having a drum kit.

So, as a surprise for Stephen, I found myself ringing the rescue centre and reserving the little puppy we had met at the beginning of the week. This was to be Stephen's dog, Stephen's responsibility, and I had nothing to do with it. All I had to do was sign the adoption papers.

When I went to reluctantly sign on the dotted line, the puppy, who must have sensed that I needed a little encouragement, walked across the counter, climbed into the crook of my arm and gently rested her soft and cute little head on my neck. I melted like a snowman in an inferno! From that day onwards, Beanie and I were inseparable. She came everywhere with me. She was always BY my side, and ON my side - even when I was in the wrong. She didn't care what I looked like or what mood I was in; she loved me unconditionally, and she made me feel so special. She was the inspiration behind all my achievements and challenges. Knowing that I was loved and trusted so much made me feel that I could do anything in life.

We all loved Beanie and could not imagine being without her; but I do not think that anyone could have possibly known her and loved her as I did. She would sense it when I was upset, and she would climb onto my lap, wrap her paws round my neck, and stay there for as long as I wanted the hug to last. There really are no words to describe how much she loved me or, indeed, how much I loved, and still love, her. I am so richly blessed to have had her in my life.

We were separated for the first time in 2006, when Beanie became ill with kidney problems and had to have one of her kidneys removed. My beautiful, brave Beanie survived the surgery and made a speedy recovery. But just as our lives were getting back to normal, I developed heart disease and, in May 2008, I suffered a heart attack, followed, two weeks later, by heart failure. When the paramedics came to take me to the hospital, Beanie's paws had to be prised from my neck and, for the three weeks that I was in the hospital, she lay on my cushion in total silence. She went out walking if she was taken, she ate if she was fed but showed no enthusiasm for anything, unless she was visiting me at the hospital.

In the months leading up to the further life-saving surgery I needed, Beanie did not leave my side. It didn't matter whether I was alone or in company, she guarded me, was tuned in to my feelings and followed me EVERYWHERE. She was only a little dog, yet so strong and protective. I felt so safe under her 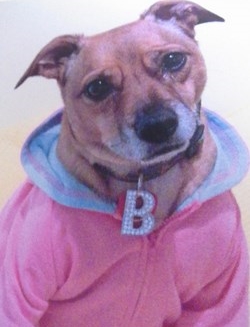 watchful and loving care. The day I left home for my surgery, I held her in my arms and told her, tearfully, that she was my life; we were a team and I would survive my operation, as she had survived hers two years earlier, and we would be together again - and we were.

Beanie herself had a heart condition, and the vet told us, in December 2013, that it had deteriorated and that she was unlikely to live until Christmas. However, Beanie was such a determined little dog, and so happy to be here, that there were no signs that she was deteriorating. The vet was also concerned about her one remaining kidney. The one things that DID break our hearts, though, was the quick and obvious deterioration of the muscle wasting disease that she'd had for a year. In the end, her hind legs wouldn't work and she was unable to even scratch her ears. I would do that for her.

On Sunday, 20th July, Beanie was sleeping peacefully on her fleece cushion. When I came down from the bathroom, I was horrified to find that blood was spurting from Beanie's eye. Believing that she had suffered an eye haemorrhage, I called to my husband Chris, who rushed in and took care of her. Eventually the bleeding stopped, and Chris said that we should take her to the vet in case she needed an antibiotic. As I felt my heart break in two, I told him, tearfully, that I agreed that we should take her to the vet, but that we should not bring her home. She couldn't walk, she had no dignity and had to be helped with a special strap, to do her 'business', and now she couldn't even scratch behind her own ears without injuring herself.

As she lay on the table at the vet, it didn't seem real, that, within seconds, my Beanie would be gone. Chris had said his goodbyes to her, but I wanted to be alone with her when she drew her last breath. I knew what it would do to my heart, but I owed it to her. I owed her EVERYTHING. Beanie would not take her eyes off me - even then she was trying to protect me from pain, and when the vet told me to say goodbye, I thanked her for everything, and then I told her that she could 'GO WALKIES', and that it would be okay.

I have never known anything in my life to be as painful as that moment. I had done the best and kindest thing for Beanie - but not for me. That happened four weeks ago, and I still feel as if my heart has been ripped out. I can neither eat nor sleep properly, and I have found it difficult to accept that Beanie is gone for ever. I can accept that her diseased body is dead; but everything that Beanie was - her loving nature, her likes and dislikes, and her funny little ways - they couldn't be dead.

The day she left me, I started to address my journal as 'Beanie', and in one entry I told her that though she was in my heart now, it wasn't enough. I needed to feel her, to see her lovely face, and to touch her. I asked her to come into my dreams, because that was the only way I could see her.

The following night, something so strange happened, that I still cannot believe it. I call it a dream, but it seemed like so much more than a dream. You see, in dreams you are not usually aware that you are in your bed. You are in another place, experiencing something either good or bad. Often, by the time you have woken up, if it was a good, or even confusing, dream, you have forgotten it; and if it was bad, you call it a 'nightmare' and can remember it 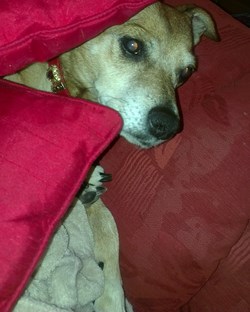 - or at least some of it. Well, I WAS aware, throughout my dream, that I was on the settee (I had fallen asleep there). I wasn't somewhere else in the 'dream'; I was right there, on the settee, with my feet up and my arm resting on the right arm of the settee. I had this image of her trotting through the patio window, all healthy and bright, and jumping onto my lap. In the 'dream', which I now understand was probably an out-of-body experience, Beanie DID come trotting through the patio window. When Beanie jumped up onto my lap, I was ecstatic. I was aware that she had died, and I couldn't believe that she was here with me. I held her chin in my hand; then I put both hands round her ears and face. I felt her warmth against me; I felt the pressure of her weight on me. It was a magical few seconds. I pleaded with her not to go, but she had to. After she'd left I opened my eyes. It wasn't like waking up. I just opened my eyes and sat there, unable to believe what had happened. It all felt so much more special than just a dream. However, life had taught me not to believe in God, miracles or magic, so I dismissed it from my mind.

Last week, I asked Beanie, through an entry in my journal, to visit me again. I went to bed and, once again, did not feel that my experience was a dream. I was aware that I was in bed, lying on my left side. Suddenly, I felt sharp pains. Beanie used to have bony elbows, and sometimes her elbows or paws would dig into me, which would hurt, and I would playfully tell her to move, or move her myself. That night I felt the pains again. I wasn't wearing any jewellery in bed so there was nothing around me that could have dug into me and caused the same sharp pains that Beanie often caused. Again, I felt the pressure of her movement, and her warmth. I opened my eyes afterwards, just as I did after the last experience. This time, though I tried to dismiss it from my mind, it was more difficult, and that is what led me to go online and ask, "Where do dogs go when they die?"

I was led to this website and, in the last two days, I have learned so much. I will always miss Beanie, and at the moment, the grief is unbearable. However, knowing that she is not dead but continuing her life in another form is so comforting. It means that we will be together again one day, and I want nothing more. I was blessed with her unconditional love, and now I have been blessed again by the OBE experiences, where Beanie and I really did have contact. I am sixty years old, and I have had enough 'ordinary' dreams to know the difference between those, and my two special experiences.

Until two days ago, I did not believe in anything like this, and I am so glad that I went online and asked that question. I was looking for a fairy tale - something magical, even though I would not believe it, to take my focus somewhere other than on the pain I felt inside, just like a child who gets to the stage where he or she no longer believes in Santa but loves to hear stories about his Christmas adventures. What I found, however, was something real and meaningful - something that gave me hope in a hopeLESS situation. I know now, that Beanie and I are going to be just fine.