Many thanks to Julie of Lancashire, UK, for this account. This one is interesting because it concerns a very special horse:

Freddie was a beautifully bred Hanoverian horse who came to me at the age of five-months and stayed until he was almost twenty-seven-years-old. 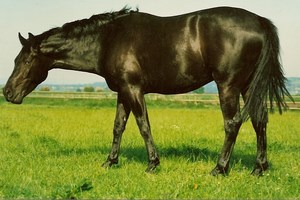 In every sense he was my horse: I backed him and trained him and I can count on the fingers of one hand how many times I allowed anyone else to ride him.

Over the years he had one or two health issues, always concerning his feet, and in the end it was an untreatable foot condition that led me to make the heartbreaking decision to let him go on the morning of Saturday August the 17th 2013. He was dispatched here at home, in his paddock, and buried in the orchard.

That night I was disturbed by one of the dogs barking at around midnight. So I got out of bed and went downstairs to see what was going on. As I passed under a light in the hall - a light that we always keep lit at night - it burst in a very violent way. Three loud bangs reverberated along the corridor and shards of glass flew everywhere. Nothing like that has ever happened before in all the thirty-two-years that we've lived in this house.

Just over a week later, on the following Sunday morning, I went out onto the stable yard as always with my giant schnauzer, Biff. Biff is affectionately known within the family as 'the velcro dog' because of his habit of sticking to my side - to the point of tripping me up if he lies down behind me and I forget he's there. 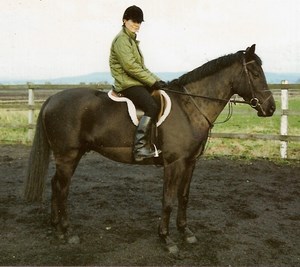 I walked into the open-ended barn as usual but, uncharacteristically, Biff would not follow. Instead he ran up and down at the entrance barking and staring, fixedly, on a spot in the corner. I couldn't understand this at all. I called out and encouraged him to follow but follow he simply would not. This was wholly uncharacteristic behaviour from Biff. I walked over to the corner of the barn on which his gaze was fixated and could see nothing unusual. In that corner stood the feed bins, just as they always had. I continued to beckon to him but he chose to remain outside.

It was only later, when back inside and recounting the experience to my husband, that it occurred to us that, whenever we forgot to fasten the kick-over stable bolt, Freddie's habit had always been to let himself out and raid the feed bins. He would even go as far as to let out the others too if he could unfasten the bolts on their stable doors. On such occasions we would always find him standing in that very corner, under the barn, with his head firmly hidden in one of the bins as he munched steadily on the proven within. Could it be that what Biff saw on that Sunday morning was Freddie's astral body? I really can think of no other logical explanation for Biff's behaviour which, incidentally, he has never repeated since.

Later, I felt other things which strengthened my belief that Freddie was close by in spirit. 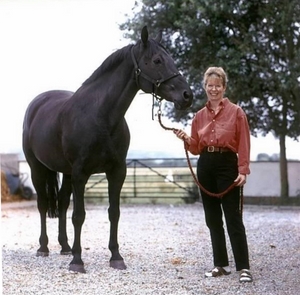 I had always felt guilt about the fact that I'd used a very expensive and fashionable German saddle on him in the early days. Later, that same saddle (although favoured by many professional riders) was found to be damaging to the soft tissue in horses' backs because it had a slight rolling movement - particularly over jumps. There were one or two other things that I would have done differently with hindsight....but then equestrian technique grows and improves all the time as better procedures are discovered and developed. Also, I did various things with my life while Freddie was here, some of which took me away from him. If I had my time again I would forsake any worldly success for a little bit more time with Freddie.

Anyway, I bought one or two young horses a few months before Freddie's passing and, soon after he died, felt a very clear message from him in which he told me to do for them everything that I would have liked to do for him had I known better. It's as if he knew that such effort would make his loss more positive and purposeful for me.