Many thanks to Marilyn of Connecticut for this account:

I recently lost my black labrador, Cheyenne. Cheyenne had the intelligence of a 4/5 year old. She was the only family I came home to every day for 17 years; she was my daughter and fur child. The vets insisted I was holding on too long; she could not longer walk from extreme arthritis and she would often fall over. Her bodily functions were gone and I would give her baths several times a day in a hospice situation. 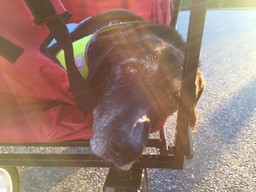 During Cheyenne's last days, I went out and bought a red canvas wagon. I was determined that she would see all the nature trails we had walked along together for 17 years on the nature preserve trails here in Connecticut. When I took her out in it, she perked up and peeked out the wagon and took in all the sights and sounds of birds chirping, chipmunks dashing and the sunlight streaming through the tree branches onto the trail. Every second was precious! I took one close-up photo of her and it was magical, because when I viewed it again later on after her passing, it had a rainbow across her eyes and face!

Needless to say, finally I had to make "that" grueling decision and on 30 June 2015 she passed away in my garden. I never knew grief could be so deep. It was agonizing! I lost my second sister to cancer, yet Cheyenne's passing was 100 times worse. She was part of my energy and my soul and was taken away.

Soon after her passing, some amazing things happened. They showed me that Cheyenne was still alive in spirit.

After the third night of her passing on, I had a vivid dream. She appeared to jump up on my bed where I was sleeping exactly in real life with my other dog Timber (a flat coat retriever). She was extremely out of breath, like she was running at maximum speed. She leaped up onto the end of the bed. It was so VIVID! I reached for her, thinking, "Oh, my God! I want to hold her!" and knew that as I reached out, it would fade. "Please don't fade," I thought, and I woke up sitting up in my bed...

This happened when her stone was delivered to my house. I discovered the box on my porch in the morning. I brought it inside, but decided after placing it in front of the fireplace to deal with it after work. When I got home that evening, I was sitting in a side room and heard a noise. It was a plaque with the letter M, which had been nailed to my bedroom door. It had fallen off and was close to where the stone was. I said, "Well, OK, Cheyenne. I'll put your memorial stone outside right now for you in the garden!...." 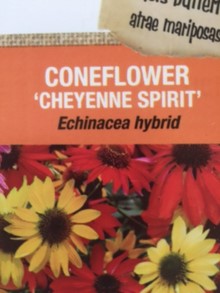 Cheyenne had a dog buddy, named Flash, who had also passed on. Well, my friend Jackie liked Cheyenne's garden memorial so much that she asked me to do one for her Flash, a golden retriever that used to play with Cheyenne. Once we got to the garden nursery, Jackie insisted on a specific color flower that would remind her of the yellow orange coat that Flash had. We decided to pick one perennial and placed six of them on a flat bed. Jackie then pulled out the flower tag...and this is what it read:

My friend Jackie declared, "Marilyn, it says, 'Cheyenne Spirit'!" I replied, "No, it doesn't. Stop there and I'll go get the top soil." She said, "No, it really does say, 'CHEYENNE SPIRIT'!" Her face was grey ashen. I froze, too, and we both cried a little.

Other things also happened. I had two lucid dreams of her leaping on to the end of my bed and of seeing the brightly emblazoned word, "ONE". During our time together, I had always told her that she was and is the "ONE". 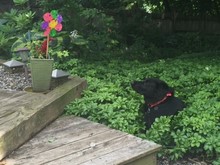 Timber often went over to her spot in the garden, sat down in the pachesandra and would stare upward for a long time. I think he was talking with his friend, Cheyenne...

I'm feeling very lost without my Cheyenne right now. Separation is very hard. I still have Timber here, my adopted dog from 2 years ago. He is a good boy and he did help keep Cheyenne company through her last days...but I still miss her...

Really, there are no words which can express how one feels at the passing of a much loved dog, but I really do sense love is eternal and through that love we can bond with another spirit, as long as we do love one another.

When I walk Timber, my 90 lb. black coat retriever, I always mentally invite her along...probably will do that for the rest of my days. She was that important. I will always love her so; she such a sweet soul.