The experiences of others

Many thanks to Sylvia Groves of Somerset, UK, for the following account:

Misty and I had a very close bond. She was a "rescue dog", a beautiful golden-coloured cross-breed. From a life on the streets, she blossomed when, for the first time, she had orchards, woods and hundreds of acres of farmland to explore. We spent time together every day outside in Nature. There never was a happier pair. And as her years advanced, she showed few signs of aging, remained athletic, healthy and fit. It was remarkable that a dog aged over 14 could be so timeless. 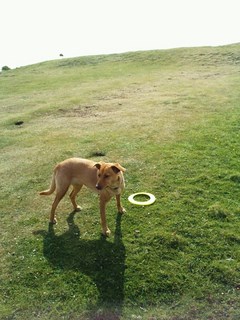 Then, in May 2012, without warning, Hemangiosarcoma struck. It is known as "the silent killer" of dogs. An incurable cancer of the blood vessels, it spreads like wildfire, and cruelly, often shows no signs of its presence until a fatal haemorrage occurs. The first internal bleed came as a bolt out of the blue on 30th. May 2012. And with it, the diagnosis that at best there could only be weeks or months of life left. Still strong and full of energy, Misty survived, and was regaining her strength, when the second bleed came only days later. This overwhelmed her whole body. She was bleeding to death. Not even emergency surgery could save her, and early in the morning of 5th. June, she was put to sleep.

I was devastated. My one true friend and loving companion was gone forever. Although I had in the past had "out-of-body experiences", I had never been 100% certain, or received any good evidence that there is a life after death for any of us. And what would happen to dogs?

Within the first month of her passing over, I had two unusual dreams. In each of the dreams, she was alive and well, and in the house! But I knew that was only the denial phase of grief speaking. Then on 6th. July, something happened which changed my viewpoint entirely. While sitting alone that evening, I was suddenly flooded with a wave of affection and greeting! Misty's love, and unmistakably Misty's character and energy! How could it be? The contact lasted for a few minutes, then passed, but I knew it was real. That was the very last thing I had expected. Again, the same thing happened while I was driving a couple of weeks later, and yet again at the end of July. Now I knew. Misty was trying to make contact.

On the morning of 11th. August, I had a sudden spontaneous out-of-body experience, where I found myself in my bedroom. Although only half out of my body and unable to see, I was fully conscious and aware. Although still unsure, I decided to call and whistle for Misty, to see what might happen. Instantly there was a stumbling sound, and then another little noise, and Misty jumped up against the side of the bed! My hands (out of body) touched her neck, the velvety texture of her ears, and more than that, felt her real living warmth! The amazing events of that morning were now enough to show me for sure that the soul lives on. Yes, even the soul of a dog. And not in some amorphous abstract form, but as a living dog! I now had my hard evidence.

The out of body experience happened again a week later, and this time I caught glimpses of Misty in the early morning sunlight, on the landing just outside the bedroom. Unfortunately the out of body experiences only ever lasted a couple of minutes at a time. But I sensed her contentment, affection and good energy. "Death" for her, was simply a doorway she had walked through, a transformation, and yet at the same time she had stayed very much 'herself'.

After that, I had no more out of body experiences where I encountered Misty. However, what did happen was that she visited often. On average, every two weeks, sometimes more frequently. A flood of love and affection, and the distinct essence of her character, would signal her presence. She still visits, ten months later. I (who never thought that I was particularly psychic, and certainly not telepathic!) am attempting to develop communication with Misty

telepathically, after one remarkable event when she gave two letters of the alphabet as an answer to the question "Has someone been helping and teaching you in the new place where you live?" I 'heard' Misty's words, not as a voice, but as words which sprang up quickly at the forefront of my mind. The letters (D.D.) meant very little to me, and I was indeed sceptical that these "words" which I was "hearing" from Misty were not a figment of my own imagination. However, since then, owing to recent unexpected feedback from someone who CAN astral travel and has seen Misty on the astral plane....it was discovered those two letters are, in fact, the name of someone who helps and companions dogs on the astral, and has been helping Misty for a while. He has a full name, but the two letters D.D. are his "nickname", based on his initials, and he was always called that before he passed over.

It's a steep but beautiful and amazing learning curve. But it is the simple grace of what has happened which I find most moving. And the love that never dies. The bond we share has not been severed, but lives on.

If you would like to read more about Sylvia's experiences, please go to: www.dog2spirit.com