Our personal experience: animals on the astral plane

The description on this site of what happens after "passing over" is based upon extensive reading of the subject. However, in the summer of 2011 we ourselves came to experience this situation at first hand, in connection with a dog. But we are talking about no ordinary dog, as you will see.... 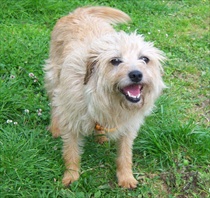 Let us introduce ourselves: we are Peter and Tamara (husband and wife), both humans still on this earth, and Puce, a former dog now based on the astral. That last phrase needs explanation: we say "former dog", because Puce was a fun-loving, ever playful, loyal and very affectionate animal whilst in the physical world. However - as we shall explain later - she has since evolved spiritually and mentally at a rapid rate, with special instruction on the astral. Although she still retains all her canine memories and instincts, her evolution is such that it is more appropriate now to call her an "astral being". We say that she is "based on the astral", because she still comes regularly to visit us from the astral, coming usually for a few hours but sometimes for much of the day - and not without purpose, as you will also see....

We were very closely attached to Puce in the physical world. She was always with us, inside the house, or outside helping in the gardens and fields (with our sheep or digging for moles, etc.), going for walks, travelling in the car to town or on visits, and even on overseas trips to the UK. On the rare occasions when we had to leave her behind, to go to a restaurant for example, then we missed her company and she missed us; this resulted in joyous reunions on our return, even if the separation only lasted a couple of hours. Such was our spiritual bond with her.

When dearest Puce passed over, she chose to leave her physical body in a hedge, with a clear view of her beloved sheep field, where she used to explore and dig. This was a conscious choice; we moved her twice to a more comfortable spot, but she returned back to the hedge. She spent several hours staring at the field and the sheep, not accepting any food or water, until she finally passed over.

We were both devastated and full of tears. Puce's beautiful physical body was buried under a flowering shrub with dignity and much love. We said goodbye to her and wished her happiness in the "world beyond" - although at that time we did not have much idea of what that meant. But then events took a totally unexpected turn....

I (Peter) was still disconsolate with grief. I was walking in the garden, when suddenly I became aware of what seemed like tickling on my cheeks, then on my neck, then on my hands. At first I thought that a spider was crawling on me, but this was not the case. This tickling continued - and then I became aware of what seemed like arms wrapped around my neck. Then to my great surprise a voice inside my head said very clearly, "It's me, Puce! I am still here. I am on your shoulders!" 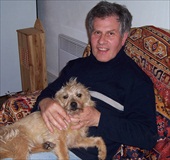 Of course, sceptics are welcome to dismiss this as a figment of the imagination of a human who has recently "lost" a loved one. But I regard myself as a level-headed, rational person not given to flights of fancy. There was no doubt in my mind that the words which I had "heard" were real. The only difference was that the words did not enter my brain via my ears, but rather arrived directly, telepathically.

At the moment all this happened, I was in the garden and about to open the cellar door in order to put on the boiler for hot water. Puce said playfully, "I'm ahead of you! I'm already in the cellar. I can pass through doors, you know."

After lighting the boiler, I went to open the garage. I asked her, "Can you pass through the thick stone wall of the garage?"

I opened the garage door and waited. For a few seconds there was silence. Then Puce declared, "I'm here - but that was a little difficult. I'd not tried going through thick stone walls before. But I managed it all right. I'm still learning all the time."

An opportunity to learn together

We will not attempt to describe all the subsequent adventures and discussions that day, many of them involving Puce showing the considerable mobility 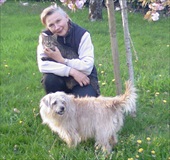 of her etheric body - e.g. going up to the roof or the top of a tree and calling out from there. Much of this displayed the same joyous playfulness which she had whilst in the physical. It is difficult to describe how I was aware of where she was at any time. Mostly she told me where she was, but with practice I developed a vague "mind's eye" vision, which got better with practice.

At first, Puce was adamant that I should tell no one about all this; but after a while she agreed that my dearest wife could be told, in view of their close attachment. My wife accepted what I told her without any hesitation or doubt. She had herself sensed "something".

Puce stayed until bed time, and then announced that she would return in the morning. And so it was....

In the morning she said that we had a unique opportunity to learn: using her mind she could enter my body, see through my eyes and indeed experience everything that I did. I had no hesitation in agreeing to this opportunity, if it meant that she would stay with us for longer.

The next few days were amazing. Telepathically I sensed that Puce was filled with awe and wonder at the things she saw - through my human eyes. She enjoyed sightseeing, "driving" the car and seeing everything higher from the ground. Even a visit to the supermarket excited her: all the bright colours, interesting sale items, the variety of foods and other goods, the checkout scanner. She had never been allowed inside before!

A brief farewell - and a return 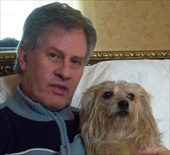 After several days like this, one day I woke up suddenly to hear Puce's voice telling me with great urgency, "I must leave you soon. I have to go. I thought I could stay as I was, but I can't. Wake up Tamara and tell her, so that we can say goodbye."

I did so. We went in the garden and I sensed Puce's etheric body leave me. Tamara and I said goodbye to her, and then after about a minute a message came to me: "I've arrived. It's very peaceful and beautiful here. I'm fine."

A couple of days passed. We assumed that Puce was in "heaven" or something like that; my knowledge of such matters was very limited at that time. Then, one evening, I became aware of her presence above my head - but neither she nor I, for some reason, could communicate telepathically as before. She stayed close for an hour or so and then left.

The next day she returned - but we were able again to communicate. She explained that she had been "changed" and had been told that she would be helped to develop spiritually and visit us regularly. It later became clearer to us that this "change" had been from her etheric body to her astral body.

Puce made daily visits to us, and every reunion was joyous. Over the next few weeks, as she developed spiritually, she explained that she had a "teacher" who was training her. His name was unpronounceable, so we call him John.

I began to study about the astral planes and the after life. This in turn led to an interest in astral projection. I really wanted to meet her teacher and to ask questions, but Puce always told me, "You will have to come with me to do that!"

With much meditation and spiritual preparation, my own skills developed and eventually I was able to visit John on the astral. He told me that all animals, both wild and domestic, settle into the astral naturally, mixing with others of their own kind. A few domestic animals who have been very close to their caretakers miss them at first, but these also settle with like minded pets and resolve to "wait" to be reunited. The word "wait" is in quotation marks because - as explained on a previous page - time as we understand it does not exist on the astral. 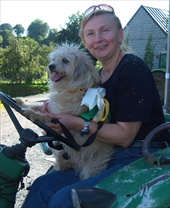 So why was Puce receiving lessons? The answer which John gave me was truly to change the direction of my life. He told me that extremely rarely, the bond between a domestic animal and its caretaker was so strong that neither could bear to be separated from the other. In such exceptional cases, a means had to found to resolve the situation, otherwise the grief would be unbearable. That was where his role came in: to assist such animals to develop spiritually and mentally, so that they could visit their caretakers and make contact, as well as reassure and comfort them.

This is what happened in our case. Puce came frequently to keep us company, help us meditate, develop astral travel skills and spiritual awareness - all without losing her own playfulness and enthusiasm.

With time, Puce has since been joined by other dogs who have passed over, and they are a team. Since then, a cat team has been formed, followed by a herbivore team (sheep, rabbits and hamster). We help pets and caretakers who have been temporarily separated to make contact, by means of visits to the physical world. Also, sometimes people write to ask if their pets are "all right" after passing over. I receive messages for help from all over the world, and we always do our best to help. This support is offered as a gesture of thanks to the Universe for blessings received and is always free. I regard astral projection as a gift, to be used for the benefit of others.

We all have a purpose in being on this earth. The only problem is that most people go through life without even wondering what it is. They are too busy with their daily affairs (work, shopping, chores, transport, etc.). In my own case, it was not until I was over 60 that the contact with Puce made me ponder the issue of a purpose in life. I am truly grateful that I have been able to find out mine: whilst on this earth, to offer free support to any person distressed at the recent "departure" of a pet; to help pets and caretakers separated by passing over to make contact; and then on the astral to continue this important work. I do not regard this as a task, but as an honour. 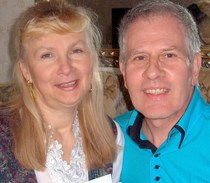 The above is a frank account of our experience. It is given as a testimony, but it must be stressed that it is not to be regarded as typical. As mentioned earlier, almost without exception animals settle into the astral naturally, and even pets with close attachment to their caretakers resolve to "wait" to be reunited. Never be upset at the passing over of a pet. You will be united again - in the shake of a lamb's tail! If you feel in need of support, nevertheless, then you are welcome to contact us via the "Contact us: Click here!" tab below. We are here to help!

We are not the only people to have had such experiences of contact with a beloved pet after passing over. If you would like to read more experiences, of other people, then please click on "Experiences of others" below. Otherwise, please feel free to explore the other pages listed.