What happens after "death"?

Before discussing animals in the afterlife, it is necessary first to look at the general issue of what happens after physical death. There are plenty of sites and articles on the internet which give accounts of what happens just before, during and shortly after death. To keep things simple, we have not cluttered this page with too much detail or references. If any topic interests you, just click on the "Further Reading" button at the bottom of this page. You will be taken to a page with lots of useful sources of information.

The topic of near death experiences is particularly well documented. Some extreme sceptics, having had such experiences, have completely changed their views. There are so many accounts of such experiences that it is difficult to choose which to quote as examples! Just do a search on the internet and you will be amazed at the number of documented cases, some supported by medical reports.

As a general rule, near death experiences include some or all of the following:

* An impression of floating above the body, sometimes near the ceiling, looking at the physical body and any other people present 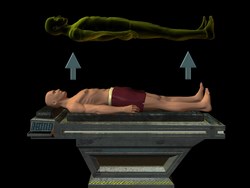 * Entering a tunnel, at the end of which is a bright light
* A feeling of wonder, awe, calm and peace
* Sometimes entering the light at the end of the tunnel and seeing relatives and friends
* A sensation or message that their time is not yet
* A return to the physical body
* A lasting memory of the intensity of the experience, often with a change of attitude to life after "death"

Before relating what happens after physical death, a little terminology needs to explained about the various "bodies" which all beings have:

a) A physical body: you know what that is!
b) An etheric body. This forms a sort of bridge between the physical and the thought-based astral body. Normally, being of much finer material, an etheric body cannot be seen by the naked eye; but sometimes vague forms can be discerned - e.g. so-called "ghosts".
c) An astral body. For want of a better phrase, this is your "soul body". It is sometimes called the "emotional body" or "desire body". In principle, this body is not material at all, consisting of our energy, thought and will. The energy aspects of the astral body probably explain its ability to influence electronic devices in the physical world (see above).
d) The mind-spirit body. This is the ultimately spiritual body, close in nature to that of the "Source" which created all types of life. In essence, this is not a body in any sense, as it transcends all concepts of shape and form, time and space. At this level, we are all connected, as creatures of the universe bearing the stamp of "life".

Yes, it has taken a while to get around to answering the question about what happens after "death"! This is because the background and terminology needed to be explained.

So, then, what happens after physical death? Basically, two things can 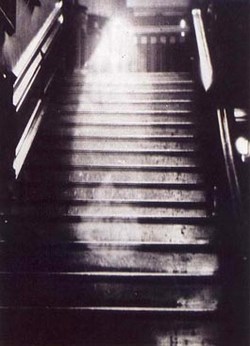 Normally, upon the physical body ceasing to function, a large amount of energy is transferred to the etheric body. This body, although energy based, still retains shape and form. The etheric body initially stays close to the physical body, as it seeks to adapt to the change of environment. Often, the recently deceased will "float" near the ceiling or nearby and hear/observe the activities of doctors, nurses and/or relatives. S/he may may attempt to communicate with relatives and friends, but normally this is unsuccessful, as etheric bodies can only be sensed by those attuned spiritually/emotionally or with specialist equipment.

The etheric body normally runs out of energy after a few days. At this stage, a natural transition to the astral planes then occurs (see 2 below). In a few rare cases, if the deceased is for some reason very closely attached to a place/event in the physical world, the etheric body remains on earth (as a "ghost") until such time as s/he gains enough insight to transit to the astral, or is given help to do so.

2. Direct transition to the astral:

In some cases, people/creatures pass directly to the astral planes. Sometimes this involves going through a tunnel toward bright light. At other times, the deceased simply finds him/herself on the astral planes immediately.

Whatever the life form which has arrived, there are always beings at hand to welcome the new arrival. Often these are friends or relatives, but those who are traumatised by the move receive help from those with experience in such matters. No one is left alone, unless they want to be; adapting to the astral takes a little practice, as will be explained below.

After reaching the astral

Some beings who have been very closely attached to someone else (e.g. life partners, or a beloved pet and its "owner") may feel feel a strong desire to return, to be with their beloved "other half". They may be deeply upset at being separated, thinking only of wanting to return at any cost. Fortunately, there are "specialists", with personal experience of such a situation. Such specialists can calm and comfort the new arrival - and provide training in adapting to the new life. They can also help the recently deceased to visit the "other half" left behind.

Adaptation to the astral and acceptance of it is essential as a first step, as otherwise the recently deceased would just want to return to the physical at any cost, and would stay there, unseen and miserable that no communication is possible with the beloved "other half". Thus adaptation precedes visitation; that is why there is often a brief delay between the departure of the etheric body and a visitation from the astral to the physical.

In cases where the love between the deceased and the beloved "other half" is intensely strong, then a visit from the astral to the physical world can result in the two being able to communicate telepathically, and even in the physical partner being able to sense where the other's astral body is. Actual physical "seeing" of an astral body is not possible - unlike with an etheric body. Nevertheless, a being which has developed finer spiritual awareness can have "mind's eye" images of the "beloved other".

We shall not attempt to describe life on the astral in detail, or what happens after that. This would take us way beyond the scope of this site.

If you want more detailed information about any of the topics mentioned on this page, we remind you that there are many links and references under "Further Reading" (click button below). Otherwise, rather than go off a tangent right now, you can click on the "Animal souls: a rationale" button. That page will directly tackle the issue of animals having souls from a rationalist viewpoint.